Come across this from friend's blog, thought of the day, 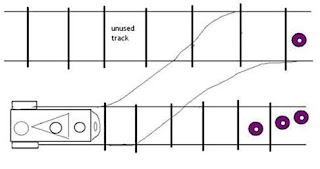 A group of children were playing near two railway tracks, one still in use while the other disused. Only one child played on the disused track, the rest on the operational track. The train is coming, and you are just beside the track interchange. You can make the train change its course to the disused track and save most of the kids. However, that would also mean the lone child playing by the disused track would be sacrificed. Or would you rather let the train go its way?

Most people might choose to divert the course of the train, and sacrifice only one child. You might think the same way, I guess. Exactly, to save most of the children at the expense of only one child was rational decision most people would make, morally and emotionally. But, have you ever thought that the child choosing to play on the disused track had in fact made the right decision to play at a safe place?

Nevertheless, he had to be sacrificed because of his ignorant friends who chose to play where the danger was. This kind of dilemma happens around us everyday. In the office, community, in politics and especially in a democratic society, the minority is often sacrificed for the interest of the majority, no matter how foolish or ignorant the majority are, and how farsighted and knowledgeable the minority are. The child who chose not to play with the rest on the operational track was sidelined. And in the case he was sacrificed, no one would shed a tear for him.

The great critic Leo Velski Julian who told the story said he would not try to change the course of the train because he believed that the kids playing on the operational track should have known very well that track was still in use, and that they should have run away if they heard the train's sirens.. If the train was diverted, that lone child would definitely die because he never thought the train could come over to that track! Moreover, that track was not in use probably because it was not safe. If the train was diverted to the track, we could put the lives of all passengers on board at stake! And in your attempt to save a few kids by sacrificing one child, you might end up sacrificing hundreds of people to save these few kids.

While we are all aware that life is full of tough decisions that need to be made, we may not realize that hasty decisions may not always be the right one.


P/S Popular is made by people, you are people so you can make popular.
at 23:19

Email ThisBlogThis!Share to TwitterShare to FacebookShare to Pinterest
物以类聚。Labels 一品锅。Random

Popular is made by people, you are people so you can make popular.

haha, no need to quote from my blog, actually i also source it frm an email by the colleague sitting next to you only. Hehe...